Record devastation to vital planetary resource dismissed by far-right president Bolsonaro, who says: ‘I am Nero, setting the Amazon aflame’

It came, witnesses said, quickly and without warning. One compared it to the “apocalypse”.

Sao Paulo – the largest city in the Americas – was plunged into afternoon darkness after vast plumes of smoke from forest fires burning across the continent suddenly swept over the city.

Brazilians living in the coastal metropolis saw day turned to night for more than an hour from 3pm on Monday.

Pictures posted to social media by alarmed residents – many unsure what was happening – show the city in near pitch black. “The final judgement is coming,” one person noted on Twitter. 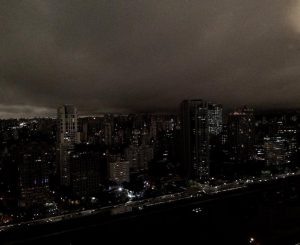 Experts have indicated the phenomenon was at least partially caused by the oft-deliberate burning of South America’s vast swathes of forests to make way for farmland.

“The smoke [came] from very dense and wide fires that have been happening for several days in [the state of] Rondonia and Bolivia,” Josélia Pegorim, a meteorologist with Climatempo, told the Globo TV network.

“The cold front changed direction and its winds transported the smoke to Sao Paulo.”