A proposed quadrupling of the rate of VAT on renewable energy systems including solar panels could backfire by putting customers off going ‘green’, a leading energy expert has warned.

David Jones, whose Denbigh-based Hafod Renewables are specialists in the installation of new ‘green’ technologies, says the increase from five to 20 per cent will have little effect on cost for homeowners but could put many off installing systems.

The Government proposal is to increase rates on energy savings materials like domestic solar panels, biomass boilers and battery storage to 20 per cent to bring the UK into line with Europe. 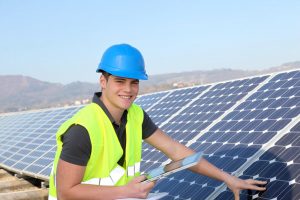 “It will only apply where the cost of the materials for a project exceeds 20 per cent of the total cost which rarely happens for homes and it will stay at the lower rate for those over 60, those receiving benefits and care home, hall of residence and other ‘relevant residential purposes’ buildings.

“I think though that it will send a signal that the cost of a solar or other renewable system will be ballooning and that the Government are out to tax renewable energy.

“That would run contrary to the intention to cut our reliance on fossil fuels to zero by 2050 and may put many people off when it is even more important that people switch to renewable systems to achieve that target.

“The move seems unfair as electricity from coal and gas powered stations currently benefits from the reduced rate of five per cent.

“Fossil fuels such as coal and gas already have a million or so years head start on solar power so to tax solar in this way would be the same as giving a hare a 10 mile head start in a race with a tortoise!.”