Europe’s residential battery energy storage systems (BESS) market is expected to continue its upward trajectory in the coming years after 745MWh of additional capacity was installed in 2019, representing a 57% increase year-on-year.

That’s according to new analysis from trade body SolarPower Europe, which says total installed capacity reached almost 2GWh at the end of 2019 and revealed that a “significant untapped market potential” exists as only 7% of European residential PV is coupled with battery storage.

While COVID-19 is expected to take its toll on the market in 2020, with year-on-year growth forecast at 9%, this impact is less than previously thought due to the resilience of the German market.

With almost 500MWh installed and a 66% market share, Germany is by far the leading European market for residential BESS. In 2019, the country installed 63,000 residential battery storage systems with a total capacity of around 496MWh. 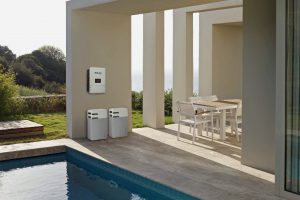 In total, Europe’s top five countries – Germany, Italy, the UK, Austria, Switzerland – amount to over 90% of the European market.

Michael Schmela, executive advisor at SolarPower Europe, said efforts are now needed to expand the momentum from the pioneering markets across the continent. “With European Green Deal instruments, such as Next Generation EU, and national recovery plans, there is a big toolbox available to continue this growth trajectory.”

Despite the slowdown in growth this year, the deployment of home storage will accelerate again in 2021. According to SolarPower Europe’s most-likely medium scenario, yearly growth rate is expected to be in the two-digit range again at 14% in 2021, boosted by recovery packages, then slowing down to an 11% growth rate in 2022, before moving up to 13% in 2023 and 16% in 2024.

This scenario expects that the 1GWh storage capacity addition threshold should be reached in 2022, corresponding to approximately 140,000 new systems installed per year.

The analysis says in a 100% renewable energy system, electricity storage becomes crucial in providing an uninterrupted energy supply, backing up to 24% of European electricity demand. “In order to achieve this, distributed BESS installed capacity need to surge to 900GWh by 2030 and 1,600GWh by 2050, an immense growth from the level installed today, said Raffaele Rossi, coordinator of SolarPower Europe’s Solar & Storage Workstream.

“European and national policymakers should recognise this huge potential and promote distributed storage in their energy and climate plans.”