Crops under solar panels can be a win-win

Crops under solar panels can be a win-win

One is catching sunlight to do photosynthesis, the other wants to take it to push electrons. Surely Highlander rules apply, and there can be only one on a plot of land, right? 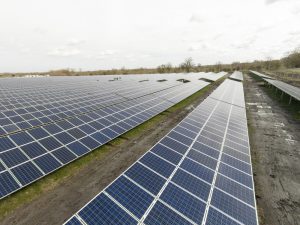 In reality, it’s not a zero-sum game. Some plants will burn in direct sun, after all, and so there are plenty of food crops that would be happy to share their space with panels. And as a new study led by the University of Arizona’s Greg Barron-Gafford shows, the combination isn’t even necessarily a compromise—there are some synergies that can bring significant benefits to a solar-agriculture.

Prof. Barron-Gafford et al. focused on dry areas like the American Southwest, where water for crops is limiting and things are projected to get drier. The shade provided by solar panels could lower soil surface temperatures and evaporation, the researchers thought, and vegetation could similarly keep the panels themselves a little cooler than a bare ground installation. Since solar panel efficiency drops at high temperature, that could mean more electricity generated.

To test this, the researchers set up three plots for the summer months: one only solar panels, one with only crops, and one with both. The solar panels, in this case, were built to stand a little over 3 meters off the ground—higher than a typical solar array. All three plots were irrigated the same, and temperatures, humidity, and soil moisture were tracked. Cherry tomatoes, jalapeños, and chiltepin peppers were chosen as the crops to test.

The results showed that combining things did alter temperatures, as expected. Air temperatures stayed a little over 1°C cooler during the day, on average, but they also stayed about 0.5°C warmer overnight. The temperature of the solar panels, though, was about 9°C cooler during the day because of the growth beneath them. The air was also a little less dry under the solar panels, and the soil dried out more slowly between waterings.