Many of us recently experienced a major national power cut, one that would have been worse had it not been for grid battery storage. In the same way, a battery is a good option to help get us through power cuts in the home and keeping the lights on. 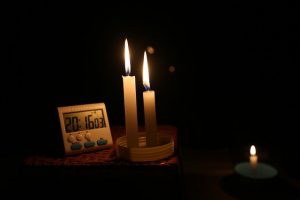 Watching the clock in a power cut (Image: gentleflamechen/Pixabay)

Here I’m going to explain the levels of power cut backup available in a home (or office) from one of our PowerBanx battery systems. These options are known collectively as Emergency Power Systems (EPS).

It should be noted that a battery will not give backup ‘out of the box’ so it needs to be planned for ahead of the install. Furthermore, most people are not aware that a standard UK home solar array is required by law to turn off in a power cut, for the safety of grid workers, so it is usually of no help in a power cut (the exception being our advanced Level 5 option below).

Our standard battery system uses a Sofar inverter with an EPS outlet, and a double 13A socket can be wired to this output. This is at low cost (no more than £150 at install time) depending on the system. 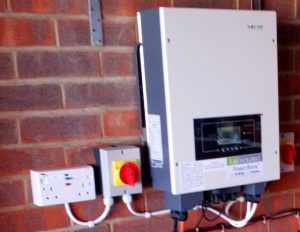 In the event of a power cut, within a couple of seconds the inverter automatically disconnects from the grid and switches the sockets live. At that point they can power most smaller loads and be used for tasks such as charging mobile phones or torches and powering lamps. With a bit of ingenuity and an extension lead they could keep a fridge powered.

With the addition of an extra consumer unit and some wiring the battery inverter can be used to operate one or more circuits, typically lighting and perhaps also the fridge. Again in a power cut after a short delay these circuits will become automatically powered by the battery system.

Note, though, because of power limits on the EPS output this approach cannot be used to power the whole house as large power draws (e.g. if there is a power shower on when the power cut starts) will cause the EPS to shut down.

To address the issue with Level 2 of high power draws exceeding the EPS capability we introduce a manual changeover switch. In the event of a power cut everything goes off; the homeowner then ensures all high power loads are switched off (primarily showers, ovens and electric car chargers). Then they engage the changeover switch so the whole house – less those loads switched off – comes back on running from the battery. 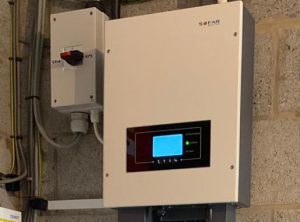 This extra level of backup is a significant step up. We introduce an off-grid battery inverter that is capable of running the house indefinitely whether the grid is connected or not; typically we use Victron inverters. As with Level 3 the house power comes from the grid via the battery system. However, these sophisticated systems are capable of managing high power loads and of automatically swapping over from grid to battery in the event of a power cut. And they can do it so fast that they are effectively Uninterruptible Power Supply (UPS) systems, so that even sensitive electronics like PCs cannot notice the changeover. In the event of a power cut everything carries on automatically and seamlessly.

Note that as well as needing a sophisticated battery inverter this system also needs a large battery otherwise it will not be able to power the house for long.

If a solar and battery system is designed and installed from scratch then it is possible to incorporate a special solar inverter that is capable of running when disconnected from the grid (which, as we saw above, is non-standard). While all solar inverters need a power connection to operate, in this type of system the battery inverter provides power to the solar inverter so that it can continue running even though the grid connection has gone. The whole house is isolated by the battery inverter – which as we’ve seen is the first point where the grid connection goes when entering the house – so all safety concerns are covered. 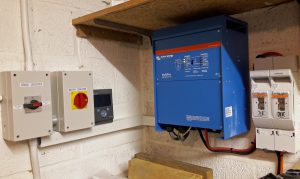 A particular advantage of this system is that the solar inverter will provide power as long as there is sunshine not just to power the house but also to keep the batteries topped up. In good weather conditions this system has the potential to keep working indefinitely, however long the power cut, as every day the batteries will fill back up again.