Want to beat rising energy prices… could you live off-grid?

Want to beat rising energy prices… could you live off-grid?

It sounds radical but 150,000 people Britons have already cut the cord and become self-sufficient

As energy bills soar and Britain braces itself for a winter of discontent, there is one family who aren’t worried.

Matthew and Charis Watkinson, and their children Elsa and Billy, have managed to evade the national energy crisis by becoming totally self-sufficient.

The young family are one of tens of thousands of Britons who now live ‘off-grid’ — meaning they are disconnected from the national energy supply.

Electricity in their self-built eco-home in West Wales is powered by wind and solar panels, which cost £5,000 to install, while they use firewood for their heating and hot water.

They even have a biodigester which transforms organic food waste into cooking gas.

And it means they are totally bill-free — making them one of the few families in the UK who don’t need to worry about the cost of living this winter.

‘Having no bills was the big liberator for us,’ says Matthew, who spent around £1,500 on utilities every year.

‘We were starting to think more about global stability and wanted to protect ourselves against crises in the world. 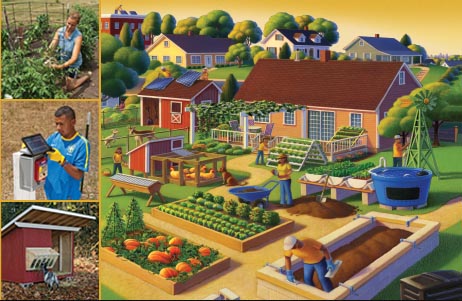 ‘We feel very insulated against rising energy prices. We do feel a little smug but we feel bad for everybody else who has to struggle with this.’

Six energy suppliers have gone bust in recent weeks — including Avro Energy and Utility Point — with nearly 1.5 million customers hit and forced to pay more for their power.

This is due to gas market prices which have soared over the past year thanks to strong global demand. Those whose energy supplier goes bust are typically moved onto more expensive standard variable tariffs.

Energy regulator Ofgem warned on Sunday that gas prices are up four-fold, with bills set to spiral for millions of households from October.

On top of this, national tax hikes and rising inflation mean experts are warning of a cost-of-living crisis for families.

It is exactly this type of national storm that Matthew, 44, and Charis, 36, are intent on avoiding.

Prior to living off-grid, they were both working as vets in East London and had saved up enough for a house deposit.

But the 2008 financial crisis and later the 2011 riots along with concerns over climate change had left them wanting to escape the rat-race and become more self-sufficient.

They used up their savings to buy three fields in Pembrokeshire before building their own home made from repurposed vehicles.

Matthew says: ‘We still have a car so we are still affected by petrol shortages but we’re hoping to become less reliant on that.

‘We’re not trying to be moralistic and preach to other people. Our key message is just that living off-grid is really great fun, it’s really liberating — certainly from a financial point of view.’

The family make their money by operating tours of their farm along with courses teaching others how to be more self-sufficient. And they are not the only ones to be protected from the current crisis.

Read more: This is Money