Tesla is starting to ramp up the deployment of Powerwalls and it is proving useful for many homeowners.

Today, Tesla shared a picture of a Powerwall house with lights on while a power outage plunged an entire neighbourhood in the dark.

There are a few different use cases for Tesla’s Powerwall.

Homeowners can use it to reduce their power use during peak demand in order to reduce their electricity bills, which can be even more beneficial if combined with a solar power system. 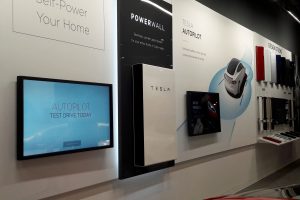 It can also be used for backup power in cases of power outages.

Tesla has recently launched new hardware, Tesla Gateway 2, in order to facilitate the use of Powerwall for backup power.

The battery packs have already proved useful in dangerous situations, including keeping the lights on in Puerto Rico after the hurricanes.

Today, Tesla shared another example with pictures of a homeowner with Tesla solar and Powerwall being the only source of light in their neighborhood in New Jersey that was plunged in the dark after a power outage.