Soon, your car might be able to power your house—here’s why that matters

Soon, your car might be able to power your house—here’s why that matters

Also known as V2G—or V2X—bidirectional charging means power can flow both into and out from an EV’s battery.

“You drive around and you see all these F-150s in the driveways, and all I could think was, Man, a year from now, the world could have been different for a lot of these people,” O’Gorman, Ford’s electric vehicle manager of strategic partnerships, told Emerging Tech Brew. 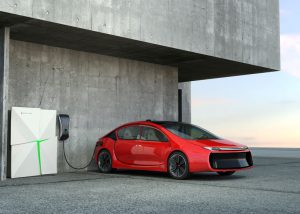 That’s because Ford’s new all-electric F-150 Lightning can also serve as a generator, using the truck’s battery to power your house for up to three days, the company says. When the F-150 Lightning rolls out to customers next year, it will be the first vehicle widely available in the US that can directly integrate with your home’s electrical system, according to the company. Ford is working with solar storage company Sunrun to install the necessary charging and inverter hardware for customers who want it.

At the broadest level, this capability is called bidirectional charging—a vehicle battery that can both charge, to receive energy, and discharge, to supply energy. This tech holds promise for extreme situations like what O’Gorman described in Texas, but also for expanding the supply of electricity available to the grid day-to-day. An increase in EV ownership will mean more demand for electricity, but it also presents an opportunity for flexible storage of renewable energies like wind and solar.

The Nissan Leaf has been equipped with tech for charging the home or appliances for nearly a decade, but it’s been essentially impossible to use in the US due partly to a lack of hardware.