Record start to 2020 for renewable generation

Record start to 2020 for renewable generation

In Q1 of 2020, renewables generated a record 47% of the UK’s electricity, according to new figures from the Department for Business, Energy and Industrial Strategy (BEIS).

Together, wind, solar, hydro and other renewables smashed last year’s total of 35.9% thanks to increased capacities and higher wind speeds through February when a number of storms battered the UK. By the end of March, renewable capacity was 47.4GW, an increase of 5.2GW from the same period the year previously. 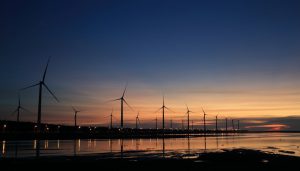 BEIS’s quarterly report showed that wind generated 30% of the UK’s power between January and March, with 14.7% from onshore wind and 15.2% from offshore. This beat the previous wind generation high, recorded in Q4 of 2019 when wind generated 22.3%.

Coal power generation reached a record low level, down 26% compared to Q1 2019. This trend is expected to continue when Q2 statistics are released, as the UK marked a historic milestone by keeping coal off the grid for over two months between April and June, thanks to surging renewables and low demand caused by the COVID-19 lockdown.