While many American industries have fallen on hard times during the COVID-19 pandemic, the home energy storage market enjoyed its second-best quarter on record in the second quarter of 2020.

The Energy Storage Monitor noted that more homeowners than ever before are turning to backup power solutions in the form of stored solar energy. This comes during a year when prolonged grid outages caused by hurricanes and wildfires have struck many parts of the country.

The report expects ongoing home construction to drive even stronger growth in the latter part of the year. As a result, 2020 could double the battery capacity installed in 2019. 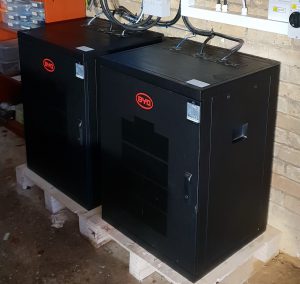 “The year is going to close out in a big way,” said Daniel Finn-Foley, one of the report’s authors. “We’re going to top a gigawatt of storage deployed annually for the first time in the U.S. market.”

Finn-Foley added that 2021 installations are on pace to surpass 3.7 gigawatts, representing a seven-fold increase over 2019. As the residential energy storage market continues its remarkable trajectory, four of the most active companies are: NeoVolta, Tesla, Sunpower and Generac.

NeoVolta (OTCQB: NEOV) – San Diego based NeoVolta, whose stock is trading around $3.80 per share, is the only pure-play energy storage company on this list. Recently, NeoVolta announced a 211% quarter-on-quarter increase in first quarter 2021 revenues. The company reported that revenues for the quarter ending September 30, 2020 were $1,000,171, compared to $321,650 for the same quarter of last year. This dramatic growth quarter-on-quarter reflected a continuing increase in sales of the company’s NV14 and NV24 energy storage systems, primarily through a group of wholesale dealers and installers in California. With the increase in demand, the company has doubled its production in 2020 and plans to quadruple capacity by the end of this year. Read more about NEOV and recent news developments by visiting: https://www.neovolta.com/news/

Tesla (NASDAQ: TSLA) – Tesla, the California-based electric vehicle maker whose stock is trading about $425 per share, is also a major player in home energy storage. Since its 2015 launch, their lithium ion based Powerwall 2, delivering 13.5 kilowatt-hours (kWh) of storage capacity, has been Tesla’s flagship residential storage product. The company installed its 100,000th Powerwall earlier this year, but delivery delays currently extend into 2021. It features Time-Based Control, which actively works to maximize the value of the solar generation and a home’s energy usage from the grid to intelligently charge and discharge based on the time and price of energy.

Sunpower (NASDAQ: SPWR) – SunPower, trading at around $16 per share, has been a solar innovator out of Silicon Valley since 1985. During the second quarter of 2020, SunPower introduced the all-in-one SunVault residential storage solution, which is integrated with SunPower solar panels. The Equinox delivers up to 13 kWh of storage capacity, has a 10-year warranty, and is rated for indoor and outdoor use.

Generac (NYSE: GNRC) – This Wisconsin-based company, which trades at around $223 per share, began manufacturing backup power generators in 1959 starting with gas-fueled generators for homes and RVs. Since then, they have sold more than two million residential generators. Generac entered the home energy storage market with the acquisition of Pika Energy in April 2019. In the fall of 2019, the company unveiled its 8.6 kWh PWRcell solar storage technology, which can be configured up to 17.1 kWh.