Many people want to know how much free electricity and income their home roof could generate if fitted with solar panels – if that includes you, then you’ve come to the right place.

First we’ll look at how much electricity you could generate, and then see what that’s worth in financial terms.

How Much Electricity Could My Roof Generate?

For a solar panel company to quote to a potential customer how much electricity solar panels could generate their is a complex legally set-down procedure to go through, for obvious consumer protection reasons. We can’t cover that here – but if you’re just at the stage of seeing if it could work for you at all, we’ll show how to get an indicative value.

To do this we’re going to use an EU website that has behind it a geographical solar generation database. When you specify your location and some basic details of a proposed solar array it can immediately look up how much average generation you can expect. 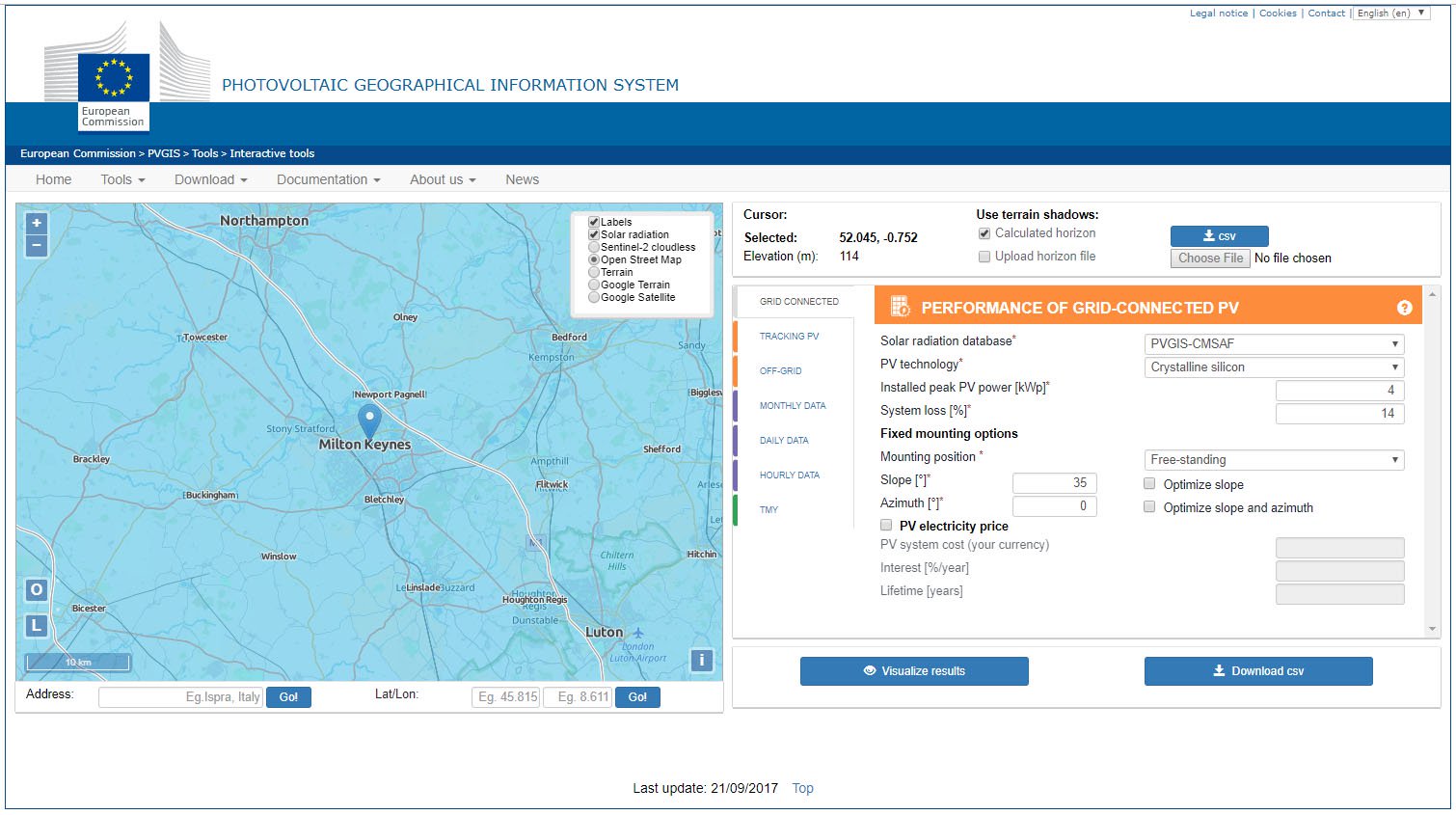 This is the process – it’s quick and easy:

2. Bottom left, put your postcode in the Address box and hit Go! The map should now be centred on your area, and a number of defaults will have been set in the ‘PERFORMANCE OF GRID-CONNECTED PV’ area on the right.

3. Set the power of your preferred solar array in the Installed peak PV power [kWp] box (kWp simply means the peak amount of power in kiloWatts). In the UK a typical array will be 4 kWp, meaning it can generate a maximum of 4 kW on a perfect sunny day, so that’s a good figure to start with.

4. There’s just one more number you need to set, that’s Azimuth [°]. This is an angle that indicates how far your roof is pointed away from south. The default is zero, i.e. due south, but you should make a guess of what the angle actually is – say 20 degrees – bearing in mind that 20 means south-south-west whereas -20 means south-south-east. A good way to see your roof angle is to see it in Google Satellite view. You can even set the map on the left to give you this view (click on the icon top right in it).

6. You’ll see the results appear below the button. There’s lots of data here, but to keep things simple let’s just look at one figure – the amount of energy you’ll get in a year. That’s bottom left, under Simulation outputs, and it’s called Yearly PV energy production [kWh].

I followed the above process putting in a central England (actually Milton Keynes) postcode, for a standard 4 kWp system facing south (zero Azimuth), and the result was 4110 kWh. Let’s call it 4000 kWh to keep the following sums easy.

How Much Money Could My Roof Make?

There are two elements to consider when working out how much solar generated electricity is worth: the government subsidy, and the savings on your bill.

The good news about this subsidy is that it’s relatively easy to calculate. The bad news is that the government is killing it early next year, so if you’re reading this early in 2019 then you’re probably too late to claim it. If you get it, though, you keep it for 20 years with annual increases in the payments.

There are two parts of the subsidy. Firstly, you get a Feed-in-Tariff (FiT) for everything you generate and it’s currently about 4p for every kWh (‘unit’) . Secondly, you get an Export payment of about 5p for half of your units on the assumption that you send half back to the grid (whether you do or not) – so that’s equivalent to 2.5p for every unit.

In total, therefore, to a pretty good approximation you will be paid 7.5p for every unit. Given the 4000 kWh figure we got above, this means I’d expect to get an income of about £300 per year for the next 20 years (so about £6000 in total).

It used to be that the government subsidy was a money spinner and savings on your bill were a bonus (for example, on my old PV system the government payment is about 10 times what it is now); however that’s changed. With cuts in the FiT and big rises in the cost of electricity the real benefit is in reducing the amount of expensive grid electricity you need to buy.

Exactly how much you’ll save obviously varies between households, depending particularly on how much you’re currently paying per unit, and how much you’re able to use the solar (if you’re out all day you’ll need to capture it in a battery to get the full benefit, for example).

Looking at round numbers, in an ideal situation, then 4000 kWh of solar electricity could save you 4000 units off your electricity bill. If you’re paying 15p/unit then you could save £600 per year.

Combined with the government subsidy your solar is then worth £900 per year. If you pay about £5000 for an installation and electricity prices rise at, say, 10% per annum then that’s payback in about 5 years. In practice, in real-world conditions (e.g. with some shading and/or some of your solar not being used but going back to the grid), paybacks are typically between 5 and 8 years. After that you get the free subsidy to the 20th year (if you’ve registered by the end of this year), and free electricity for the life of the equipment.

If you are interested a quote from us for solar and/or battery storage just fill in our form: