Exxon Mobil Corp. had plans to increase annual carbon-dioxide emissions by as much as the output of the entire nation of Greece, an analysis of internal documents reviewed by Bloomberg shows, setting one of the largest corporate emitters against international efforts to slow the pace of warming.

The drive to expand both fossil-fuel production and planet-warming pollution has come at a time when some of Exxon’s rivals, such as BP Plc and Royal Dutch Shell Plc, are moving to curb oil and zero-out emissions. Exxon’s own assessment of its $210 billion investment strategy shows yearly emissions rising 17% by 2025, according to internal projections.

The emissions estimates predate the Covid-19 pandemic, which has slashed global demand for oil and thrown the company’s finances into distress, making it unclear if Exxon will complete its plans for growth. The internal figures reflect only some of the measures Exxon would take to reduce emissions, the company said. The largest U.S. oil producer has never made a commitment to lower oil and gas output or set a date by which it will become carbon neutral. Exxon has also never publicly disclosed its forecasts for its own emissions. 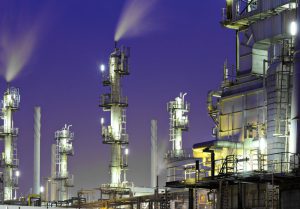 But the internal documents show for the first time that Exxon has carefully assessed the direct emissions it expects from the seven-year investment plan adopted in 2018 by Chief Executive Officer Darren Woods. A chart in the documents lists Exxon’s direct emissions for 2017—122 million metric tons of CO₂ equivalent—as well as a projected figure for 2025 of 143 million tons. The additional 21 million tons is a net result of Exxon’s estimate for ramping up production, selling assets and undertaking efforts to reduce pollution by deploying renewable energy and burying carbon dioxide.

In a statement released after the publication of this story, Exxon said its internal projections are “a preliminary, internal assessment of estimated cumulative emission growth through 2025 and did not include the [additional] mitigation and abatement measures that would have been evaluated in the planning process. Furthermore, the projections identified in the leaked documents have significantly changed, a fact that was not fully explained or prominently featured in the article.” Exxon declined to provide any details on the new projections.

The internal estimates reflect only a small portion of Exxon’s total contribution to climate change. Greenhouse gases from direct operations, such as those measured by Exxon, typically account for a fifth of the total at a large oil company; most emissions come from customers burning fuel in vehicles or other end uses, which the Exxon documents don’t account for.

That means the full climate impact of Exxon’s growth strategy would likely be five times the company’s estimate—or about 100 million tons of additional carbon dioxide—had the company accounted for so-called Scope 3 emissions. If its plans are realized, Exxon would add to the atmosphere the annual emissions of a small, developed nation, or 26 coal-fired power plants.

The emissions projections are “an early assessment that does not include additional mitigation and abatement measures that would have been considered as the next step in the process,” Exxon said in an earlier statement. “The same planning document illustrates how we have been successful in mitigating emissions in the past.”

Exxon often defends its growth plans by citing International Energy Agency estimates that trillions of dollars of new oil and gas investments are needed by 2040 to offset depletion from existing operations, even under a range of climate scenarios. However, experts say a reduction in global oil and production is necessary to limit warming to 1.5 degrees Celsius above pre-industrial levels.