Activists block entrance to headquarters of BBC, accusing it of staying silent on crisis

Extinction Rebellion activists have called on the BBC to “tell the full truth” about the climate crisis as they protested outside its headquarters in central London.

Camped outside the main entrance of New Broadcasting House on Friday morning, the protesters held a banner stating: “BBC, your silence is deadly”, and chanted”: “Whose BBC? Our BBC”, and: “BBC, can’t you see, this is an emergency”.

Police officers stood between the dozens of demonstrators and the entrance. Several appeared to be glued to the ground near the doors. 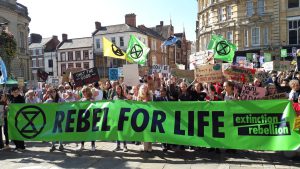 The group called on the BBC “to meet its crucial moral duty to tell the full truth on the climate and ecological emergency”.

Over a tannoy, Extinction Rebellion activists broadcast a number of mock bulletins in the style of those that could be aired if the UK was flooded.

“Make your food stocks last, ration your supply,” a man warned, before a siren rang out. “With immediate effect … martial law has been declared. The strategic climate defence committee has suspended all transport until further notice.”

BBC staff reported being unable to enter the building, and the financial journalist Paul Lewis tweeted that Extinction Rebellion had locked him out of the BBC.

A BBC spokeswoman told Reuters she could not comment on security matters.

On Thursday, a protester climbed on top of a plane at London City airport. Extinction Rebellion is using two weeks of civil disobedience to pressure governments to do more to combat greenhouse gas emissions.