The small village of La Farge, Wisconsin, was under water in 2018 after its worst flood ever.

The flooded Kickapoo River damaged the local electric co-op’s generator and substation and left the city without power for several days. The town’s only gas station was also flooded, so residents who didn’t have power had to drive 20 to 30 miles to get gas to power their diesel generators, said Samantha Laskowski, innkeeper at La Farge’s Green Apple Inn Bed and Breakfast. 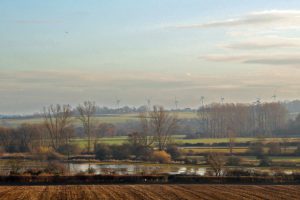 “We were lucky we didn’t lose power, but the power line that comes into our neighborhood is right there, right along the river,” Laskowski said. “Some big log could have come and knocked it down and then we would have all been out of power. So that really made the need to have some sort of storage backup really important at that point.”

A group of forward-thinking residents led by Laskowski decided it was time to procure some energy resiliency for the community.

They contacted Current Electric, based over 160 miles away in Wauwatosa, and asked about their options.

Laskowski said she and her group did most of the research for the installations ahead of time and presented them to the La Farge Village Hall members, who were grateful for the solutions to their energy pains.

“I got the feeling that this town had a very pro-solar group, which kind of aligns itself with getting people to be pro-solar at a town level and a community level,” said Current Electric president and owner Chuck Smith. “They found out that Tesla had their Powerwalls, they contacted us and said, ‘How can we make this happen?’”