Wind and solar can supply most of world’s energy needs, most of the time, says study

Wind and solar can supply most of world’s energy needs, most of the time, says study

Wind and solar power, alone, can meet more than 80 per cent of demand in many countries around the world without “crazy amounts” of storage or excess generating capacity, a new report has found.

The study led by researchers at the University of California, Irvine, and published recently in Nature Communications argues that most of the current electricity demand in advanced, industrialised nations can be met by some combination of wind and solar power.

The report’s authors, including from China’s Tsinghua University, the Carnegie Institution for Science and Caltech, don’t deny the crucial need for a range of storage and other grid balancing technologies. 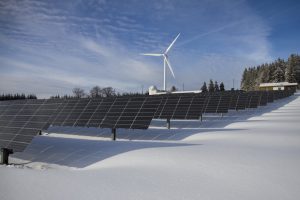 But they do stress that “reliable renewable” energy based systems can do an enormous amount of the heavy lifting needed to replace outgoing fossil fuel-based generation technologies as the world commits to a rapid shift to net-zero emissions power supplies.

The team analysed 39 years worth of hourly energy demand data from 42 major countries and found that a full conversion to sustainable power resources could be easier for larger, lower-latitude countries, which could rely on solar power availability throughout the year. Australia comes to mind.

Smaller countries, however, at higher latitude would find it more challenging to meet their electricity needs with wind and solar resources – and the study pointed to Germany as an example of this, including its recent experience of the wind “doldrums,” when other power sources had to be brought into the mix.

On average, however, the study found that electricity grids dominated by wind power were capable of meeting electricity requirements in the countries studied 72 to 91 per cent of the time, even without energy storage.