If guys with guns are talking about collapse, why can’t we?

If guys with guns are talking about collapse, why can’t we?

Thanks to Hollywood, we have all seen stories of near apocalyptic futures, where people descend into violence and depravity.

We have also seen sensationalist, even racist, TV news reporting on looting after natural disasters. It seems the mass media is not always a good channel for hearing about the solidarity and cooperation that emerges between so many of us in times of crisis. It takes authors like Rutger Bregman to remind us of the better sides of human nature. Or Rebecca Solnit to show how human solidarity has always been a powerful resource during crises. Unfortunately, such views don’t get as much airtime when it comes to dis1cussing the possibility for societal disruption and collapse.

Which is what I do. Because hundreds of scientists and scholars have been warning us that we face “global systemic collapse” due to the pressures we are putting on the planet. When I explain that to people, and they take it to heart, then their reaction often includes imagining violence on their doorstep. It’s an understandable reaction and one I also felt when learning about the dangerous pace of climate change. This fear of violence is perhaps why the phenomenon of ‘preppers’ with guns has grown in some countries. A fascination with violence seems to be why journalists reporting on people who anticipate societal collapse have often focused on that kind of prepper, rather than the people growing food or campaigning non-violently because they want to soften the collapse. 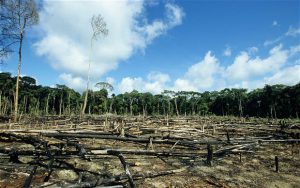 To mark the UK’s day of remembrance, the campaign group Extinction Rebellion visited the Cenotaph and, with British Service Veteran Donald Bell, unfurled a banner saying “Honour Their Sacrifice: Climate Change Means War.” The reaction from the media was mixed, with some expressing annoyance and others wondering just how climate change might lead to war. Hopefully some more people will have looked at the work of the UK’s Ministry of Defence (MOD) on climate. Because, for at least the last 2 years, the UK military have been planning how to operate in a world experiencing a catastrophic rise in global temperatures. The MOD has a unit of 60 personnel looking at trends that affect the security of the UK, and the capabilities of its militaries. They produced a report in 2018 that summarised the risk of major disruption from climate change. The head of the unit that produced the report, Brigadier Ewen Murchison said their key finding was “the pace of change and level of uncertainty could outpace good governance and unity.” He was highlighting how dangerous climate change ultimately impacts on society and politics.

In a follow up report to the MOD in 2020, the authors note that with current trajectories, “temperatures are predicted to increase by 2.3–3.5°C by 2100.” As strategists, they take this scenario as both plausible, because it extrapolates current trends, and likely, because there are no signs of those trends changing. They then assess the climate change impacts on the context and functioning of the military.

The report recognises how the cascading effects of rapid climate change affect all of society. For instance, it increases the risks of disease outbreaks and disrupts the transportation networks and utilities needed to sustain healthcare. They warn that by 2030 the world could already face a ‘perfect storm’ of food, water and energy crises. “The demand for food and energy is estimated to rise by 50 percent by 2030, while water demand has been projected to increase by 30 percent,” the report notes. “In regions where food shortages are combined with poor governance, climate change could contribute to civilian protests, rioting and an increased likelihood of violent conflict.” That conclusion echoed the 2018 MOD report which explained “climate change may increase the probability of simultaneous breadbasket failures with the potential for devastating impacts on the global food market. There could be knock on effects for worldwide stability as higher food prices, in combination with poor governance, have been shown to heighten the risk of protests riots and conflict.”

What someone considers to be ‘poor governance’ is subjective. In a situation of food and water shortage, then upholding free markets rather than enforcing the means of supplying basic needs could be a form of poor governance found in many states not considered to the MOD, including the UK itself.