Gov. Tony Evers caused a bit of a stir this year when he said Wisconsin should have a goal of generating carbon-free electricity by the year 2050.

That would mean no coal-fired power plants in the state, and several other changes. Energy experts say one of those changes would likely involve more use of devices to temporarily store electricity from cleaner sources like solar and wind power.

Republicans in the state Legislature have since removed the carbon-free language from the Democratic governor’s state budget proposal, arguing it’s a policy item. 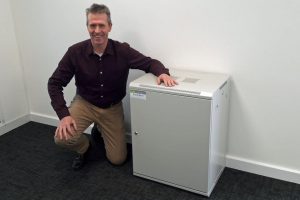 But some Wisconsin utilities have promised to reduce their carbon emissions, and other states are aiming to eventually go carbon free.

And, some homeowners have already discovered energy storage.

West Bend resident Peter Gibeau has a storage unit in his basement that he keeps in two plastic boxes. Inside each container — known as a battery bank — are eight, flooded lead-acid batteries. Other equipment called inverters, charge controllers, and disconnects are nearby.