Coastal areas in the UK and Northern Europe will experience an increase in “compound flooding” in coming decades say researchers.

These events, where storm surges and heavy rainfall combine, will become more common thanks to rising global temperatures.

Devon, Cornwall and the Bristol channel may become “hotspots” with events seen more than once every six years. 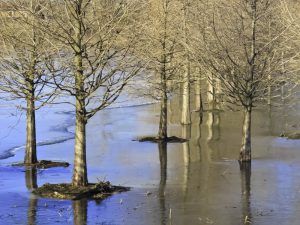 The study is published in the journal Science Advances.

Researchers say that floods on the Avon in Bristol in 2014 and in Ravenna in Italy in 2015 are both good examples of compound events that have caused significant losses to people and property.

These events are marked by a combination of storm surge and heavy rainfall, sometimes driven by the same low pressure system.

Storm surges can be made worse with heavy precipitation but they can also cause trouble by blocking or slowing down the draining of a river into the sea following a period of sustained rainfall.