Climate and Ecological Crisis? What’s all the fuss about?

Climate and Ecological Crisis? What’s all the fuss about?

On Friday night I attended a talk on climate change held in Chagford in Dartmoor, south Devon. It was entitled “Climate and Ecological Crisis? What’s all the fuss about?” and I found it very interesting, and also quite moving.

I went along expecting it to be another vanilla climate change talk – you know the sort of thing, if only everyone recycled a bit more and flew on holiday a bit less everything would be fine. But it turned out to be much more than that. 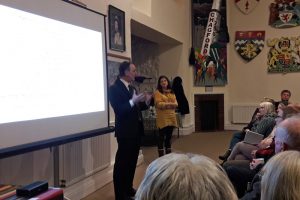 It was presented by David Ramsden who has been involved in wildlife conservation for many years. He founded the Barn Owl Trust and received an MBE from the queen for services to wildlife. According to his personal website it was reading the IPCC ‘1.5C’ report that made him decide to become a CC activist and spokesperson.

He presented well, covering the whole gamut of climate change from the geological development of fossil fuels through the science of the greenhouse effect to the latest news on where our emissions, and corresponding climate temperatures, are headed. He also had specific sections on the ecological crisis (the massive recent losses in insect and wildlife populations) and on climate denial.

The slide that most stood out for me from the whole talk was one depicting the IPCC’s Representative Concentration Pathways (RCPs), i.e. four representative paths that the climate temperature could take to 2100 with different levels of emissions. It was similar to the following one. 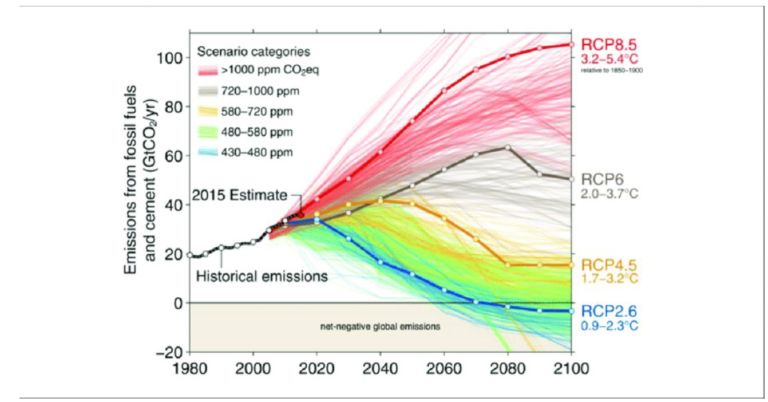 RCPs for Emissions from fossil fuels and cement (Image: N. Craik/University of Waterloo)

However, David had added additional labels so that RCP6 was something like ‘End of civilisation’ and RCP8.5 was ‘End of life on Earth’. He then added a data point to the graph, labelled ‘2020’ that showed that, despite all the IPCC reports and the deployment of renewables, current emissions are still tracking higher than ever. They are closest to the RCP8.5 line (actually slightly above). That was quite sobering, and a bit scary.

While I wouldn’t use those particular labels, nor tie them so closely to particular pathways, my following of climate science for the last 8 years leads me to believe he is broadly correct, even though it’s news that most people don’t want to know about. I thought it was brave of him to be so forthright and to avoid the usual “it’ll be alright” approach that most commentators seem to take (even in opposition to the very data they quote).

I would say that the talk was very well received, and it is encouraging to see communities like Chagford coming together to create groups wanting to disrupt ‘business as usual’ – even if those attending represented a very small minority of the local population.

I wish them well with their endeavours, and David with his further talks on the topic. Highly recommended.